Home/TED Talk, TEDxWinterPark/What Is The Difference Between TED and TEDx?
Previous Next

If you have been on the internet for a considerable period of time, chances are, you have seen a video of a TED Talk. Or maybe you have searched for TED Talks on specific topics like leadership or activism. At some point, you have noticed that some of these videos are from TED or sometimes they are labeled as TEDx[Insert City]. You probably wondered “What is the difference between TED and TEDx? We are more than happy to explain. 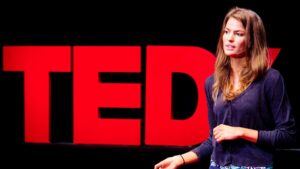 What is TED? What are TED Talks?

In order to understand the difference between TED and TEDx, we must start with what TED is. TED is a non-profit organization that is devoted to the idea of spreading ideas. The TED organization began in 1984 as a conference where “Technology, Entertainment and Design converged”. TED became known for it is short, powerful talks (18 minutes or less).

The mission of TED is to spread ideas – it is a global community that welcomes people from every discipline and culture who seek a deeper understanding of the world. TED is owned and operated by a non-profit, non-partisan foundation whose agenda is to spread great ideas.

TED was created in 1984 by Richard Saul Wurman and co-founded by Harry Marks. However, the TED Conference did not get off the ground until 1990. The TED Conference became an annual event in Monterey, California, and eventually grew into a world-renowned event. It is a roster of speakers broadened to include scientists, philosophers, musicians, businesses, philanthropists, and other influential figures. TED has expanded to include Conferences, TED Talks, The Audacious Project, global TEDx, and more.

TED and TEDx are similar in many ways, but at the end of the day, they are different entities. We have dived into the early history of TED and its story. However, did you know that before July of 2006, TED Talks were not released to the public? After TED published it is first videos online, they received millions of views. These online TED Talks had become so popular that TED relaunched their website around the TED Talks, and they now had a global audience.
Due to TED’s global reach, many people around the world wanted to host their own TED Talks.

TED fans wanted to have their own TED conference that was customized to fit the local community. These TED Talks would feature local leaders and community influencers who would share ideas relevant to their geographic area. It was also a cheaper event that the original TED conference, one that did not include a cost of $10,000. This was how TEDx was born.
In 2010, TED Curator Chris Anderson introduces the TEDx program.

What Is A TEDx Talk?

Simply put, TEDx, x=independently organized event. TEDx follows the same format as a TED Talk. The main difference between TED and TEDx is that TEDx is focused on a local, geographic area. It is a local gathering where TED-like talks and presentations are shared with the community.

In the spirit of ideas worth spreading, TED has created a program called TEDx. TEDx is a program of local, self-organized events that bring people together to share a TED-like experience. Each TEDx event is licensed by TED and must follow a specific set of rules and guidelines, much like a franchise.
TEDx has some of the same features as TED but also is its own unique event:

• The TED Format – Each TEDx event follows the TED format. It consists of a roster of short, carefully prepared talks and demonstrations. TEDx Talks are idea-focused and cover a wide range of subjects that provoke conversations that matter.

• Diversity of Topics – TEDx events offer presentations that encompass a broad spectrum of topics and issues. You get to hear diverse topics from a broad range of voices from technology, science, design, business, activism, society, child development, and community.

• Community-Driven and Bias-Free Content – Every TEDx event is organized by volunteers from the local community. Similar to TED events, there is no commercial, religious, or political agenda behind the talks. It is goal is to spark conversation, connection, and community.

What A TEDx Event Is Not

Although TEDx is inclusive in topics and speakers, there are specific criteria that every TEDx event must follow. This is what a TEDx event is NOT: 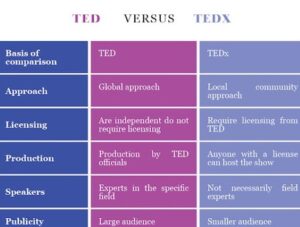 The Global Reach of TED Talks

In 2009, TED introduced a license to produce a TEDx event anywhere in the world. In turn, many independently owned TEDx events popped up around the world. Many of the well-known TEDx events include TEDxNewYork, TEDxLondon, TEDxSydney, and even TEDxTokyo. Several colleges and universities have joined the TED network such as TEDxStanford and TEDx UCLA.

How To Join or Start a TEDx

Now that you know the difference between TED and TEDx, you probably want to immediately find one in your area. You can search for a TEDx event near you. If you cannot find a TEDx event in your town, there is always the option to start one! TED has it’s own guide for organizing a TEDx event including the basics, responsibilities, TED rules and applying for a TED license. The TEDx Program is designed to help communities, organizations, and individuals to spark conversation and connection through local TED-like experiences.