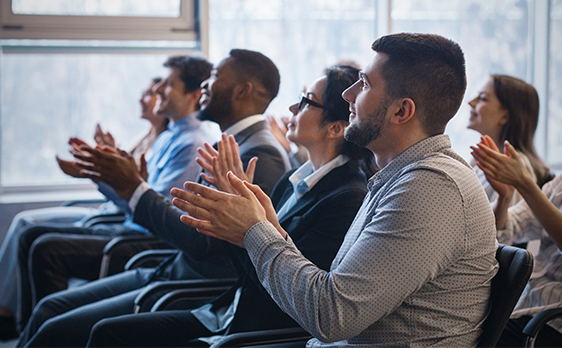 IN THE SPIRIT OF IDEAS WORTH SPREADING. TEDX IS A PROGRAM OF LOCAL, SELF-ORGANIZED EVENTS THAT BRING PEOPLE TOGETHER TO SHARE A TED TALK EXPERIENCE.

At a TEDxWinterPark event, TED Talk video and live speakers combine so to spark deep discussion and connection. Above all, these local, self-organized events are branded TEDx, where x = independently organized TED event. The TED Conference provides general guidance for the TEDx program, but individual TEDx events are self-organized. (Subject to certain rules and regulations.)

TED IS A NONPROFIT ORGANIZATION DEVOTED TO IDEAS WORTH SPREADING.

Started as a four-day conference in California 30 years ago, TED has grown to support its mission with multiple initiatives. The two annual TED Conferences invite the world’s leading thinkers and doers to speak for 18 minutes or less. Many of these talks are then made available, free, at TED.com. TED speakers have included Bill Gates, Jane Goodall, Elizabeth Gilbert, and Sir Richard Branson.

TEDX IS A PROGRAM OF LOCAL, SELF-ORGANIZED EVENTS THAT BRING PEOPLE TOGETHER TO SHARE A TED-LIKE EXPERIENCE.

HOW DID A ONE-OFF CONFERENCE ABOUT TECHNOLOGY, ENTERTAINMENT AND DESIGN BECOME A VIRAL VIDEO PHENOMENON AND A WORLDWIDE COMMUNITY OF PASSIONATE PEOPLE?

TED was born in 1984 out of Richard Saul Wurman’s observation of a powerful convergence among three fields: technology, entertainment and design. The first TED, which he co-founded with Harry Marks, included a demo of the compact disc, the e-book and cutting-edge 3D graphics from Lucasfilm, while mathematician Benoit Mandelbrot demonstrated how to map coastlines using his developing theory of fractal geometry.

The first six TED Talks were posted online on June 27, 2006. By September, they had reached more than one million views. TED Talks are now popular. In 2007, TED relaunched their website around TED Talks. Additionally, this gave a global audience free access to some of the world’s greatest thinkers, leaders and teachers.

THE NEXT WINTER PARK TED TALK

TED’s media initiatives include TED.com. Above all, they post new TED Talks daily. TED Translators, which provides subtitles and interactive transcripts as well as translations from volunteers worldwide; the educational initiative TED-Ed. Additionally, TED has established The Audacious Project that takes a collaborative approach to funding ideas with the potential to create change at thrilling scale; TEDx, which supports individuals or groups in hosting local, self- organized TED-style events around the world, and the TED Fellows program, likewise helping world-changing innovators from around the globe to amplify the impact of their remarkable projects and activities.